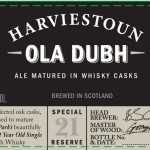 Frankenswan – Okay. So he had to go and reanimate himself. Long dead, bolts for brains, walking extremely slow yet terrorizes the table like a dark village in new moon. In Mary Shelley’s version, the reader works up sympathy for the monster. In the Welsh version, no sympathy for the devil. What’s really puzzling you is the nature of his game.
Gram Toker’s Vicula – He would bite you, but somebody stole his fangs. And his cloak. And his face paint. That’s alright with him though. There is always a greenhouse nearby for a quick bud transfusion.
Nosfergato – Creepy. Disfigured. Old. Lurking in the shadows. Smells like a musty closet. Classic, somehow, yet smells like musty closet.
American Chairwolf in London – Once in a full moon does this beast’s roar break the chilled autumn air. Might not be enough to chase the hammer, but one would need more than a hammer to fend off this furry expatriate when nature moons you through a car-window-shaped cloud.
Dubzilla – Stuck in Japan somewhere, eating tourists off of lantern lampost skewers.
RoDan – More like Rodale.
Wraith of Kong – A ghost of himself no more. That’s him hanging off the Empire State. Just don’t call him Silverback.
Hitchcock’s The Bezzirds – Lurking on the playground next to the schoolhouse.
Namath on Elm Street – only in his wildest dreams
Portland Chainstay Massacre – Transport this!
Damien, Owen Too – Self posessed
Loch Gness – Just a blur on a lake.
Careful with that Faks, Eugene – One of these days….