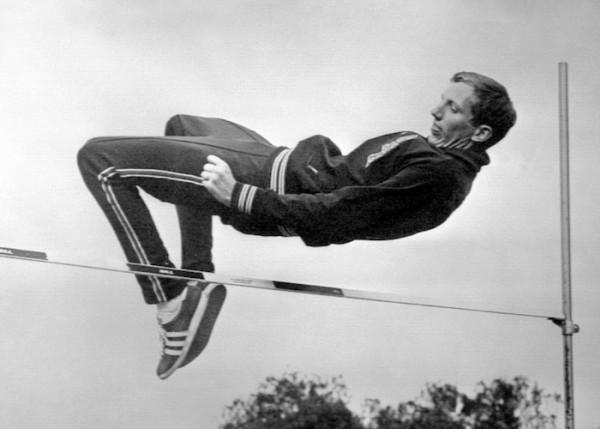 Just like Dick Fosbury at the ’68 Olympics in Mexico City, the precocious Sousley, fresh from a 12 mile cycle, summarily disposed of the field on his first night with the TFC. Using a revolutionary technique called “playing way better than everyone”, the newbie went unbeaten in three matches (two in singles) on the Glisan Street Pub’s quirky table. Gato’s pre-defeat, boastful admission of having “obsessive champion disorder” were words humbly eaten in a lonely corner after Sargeant Sousley’s decisive victory. It should also be noted that “Fosbury” overcame a less than flat table, excessively flat beer, and unparalleled flatulence by “Bad Santa” in his surgical strike against all comers. He even managed to extend the unlikely string of weekly Kilebasas to 3 weeks running. Needless to say, he is the early favorite for TFC Rookie of the Year. Even the late arriving trump card of the old watch, SA aka “Apollo Anton Ohno”, could not cook the rook. The grumbling members of the old guard found themselves stunned, bewildered, and in desperate need of whiskey. So, to the Goodfoot, where the final steps of the big con (getting Foz to pay for our whiskeys) played out like a royal flush. Oh my! Whiskeys and Laurelwood Red! Who’s that bowing out first? Is that Kong? Impossible! What time is it, anyway? Oh, its around 11:30. Hurricane! Garlic fries for the gentlemen at the far end of the bar. They wish to cut tomorrow’s cold morning air with a personal garlic cloud dispatched from the deep nether-regions of stomachdom. Worst Early Morning Death Breath if not Best Late Meal for ’09. Who’s that still hanging around? Oh yeah, the old of the old guard. Unlock, ride up Stark, then split like North and South. Home by 2:20. Dream of future revenge on this newbie upstart.