In celebration of the EBMB’s first full-time work week in a while, four fathers were summoned to test their luck on Friday the 13th at Vendetta. I think I can speak for the lot of us that Fridays at the V are definitely a sight to see. Picture after picture after picture. The patio was hopping. Dave’s coat patch proved the life of the party. Busy table, but Martin and I finally got our turn. We turned away an attractive pair despite great shots from the dame at Martin’s end. The Silent Assassin then showed, pairing up with The Chariman to test the Old Guard. The EBMB came through with an last end 8 to pull out a 16-12 win. We then made it three straight against a few chaps in a match studded with great shots throughout. Lizza bowed out, leaving Los Tres Orignales to the ride to the Goodfoot. The watch turned me into a pumpkin before I got to sample the goodfoot vibe, but I am sure B*****heart and the Snipper found warm friends and cold beers waiting. Recognition of the waning weeks of 2009 now forces our hand for the awards and the remaining matches. Proposal for a tight rota and some Last Fridays gets voted in. Regardless of schedule, there are gonna be some cold rides ahead.

Just like Dick Fosbury at the ’68 Olympics in Mexico City, the precocious Sousley, fresh from a 12 mile cycle, summarily disposed of the field on his first night with the TFC. Using a revolutionary technique called “playing way better than everyone”, the newbie went unbeaten in three matches (two in singles) on the Glisan Street Pub’s quirky table. Gato’s pre-defeat, boastful admission of having “obsessive champion disorder” were words humbly eaten in a lonely corner after Sargeant Sousley’s decisive victory. It should also be noted that “Fosbury” overcame a less than flat table, excessively flat beer, and unparalleled flatulence by “Bad Santa” in his surgical strike against all comers. He even managed to extend the unlikely string of weekly Kilebasas to 3 weeks running. Needless to say, he is the early favorite for TFC Rookie of the Year. Even the late arriving trump card of the old watch, SA aka “Apollo Anton Ohno”, could not cook the rook. The grumbling members of the old guard found themselves stunned, bewildered, and in desperate need of whiskey. So, to the Goodfoot, where the final steps of the big con (getting Foz to pay for our whiskeys) played out like a royal flush. Oh my! Whiskeys and Laurelwood Red! Who’s that bowing out first? Is that Kong? Impossible! What time is it, anyway? Oh, its around 11:30. Hurricane! Garlic fries for the gentlemen at the far end of the bar. They wish to cut tomorrow’s cold morning air with a personal garlic cloud dispatched from the deep nether-regions of stomachdom. Worst Early Morning Death Breath if not Best Late Meal for ’09. Who’s that still hanging around? Oh yeah, the old of the old guard. Unlock, ride up Stark, then split like North and South. Home by 2:20. Dream of future revenge on this newbie upstart. 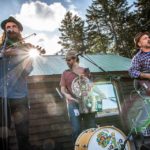 Met Dub-Dub at Beulahland. Had some cask conditioned something marvelous. To the Goodfoot for the Hackensaw Boys. A hootenanny of honest, raw bluegrass. By all counts, an unexpected surprise. Kept it a short evening due to the chilly rain that had begun to fall.